Is your market overcrowded, overfunded, or about to be?

No matter what vertical you’re operating in, the following statistic will probably resonate with you:

‘In the last 3 years, competition in every vertical is up by 5x and NPS is down by 10 points’

In other words, customers have more choice than ever and their expectations are going up. Some things that most CEOs I’ve spoken to are talking about reflecting this shift:

The old ways of selling — focusing on top of funnel and closing long-term contracts — are becoming less relevant, and just a few months ago we saw this reflected in the public markets for the first time. Three darlings of enterprise software got slammed for failing to adapt to this new reality: Zuora, Cloudera and Pivotal (Box was hit too, but less hard) 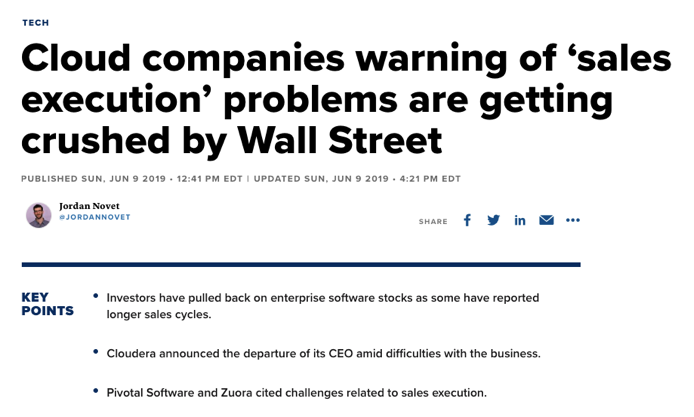 There’s nothing particularly special about this shift, except how fast it’s coming. The multi-trillion dollar cloud opportunity is past its early adopter phase and sucking in hundreds of billions of venture capital as everyone pursues the (very real) gold rush. But competition is competition and strategy is strategy, so we spent time looking to comparables in other markets where some companies thrived while others faltered. Remember these companies?

We now have very similar dynamics now in SaaS with a handful of breakout companies creating ‘winner take all’ markets. Luckily a handful of these (Square, Flexport, Wix, Zocdoc) are customers so we were lucky enough to get time with them to ask what it is they’re doing that’s helping them pull away from the pack.

No surprise — they’ve mastered the same playbooks as the legacy companies we mentioned above. They are surprisingly simple in concept but incredibly difficult to pull off, and in a coming Master Class series we’ll be highlighting the concrete tactics they’ve cultivated to develop this discipline for winning.

The TLDR; they move faster than their competition with a data driven discipline. Whereas some competitors may be able to create new products and new sales strategies once or twice a year, these companies are making decisions weekly (even sometimes daily) which is allowing them to raise money faster, deploy it more nimbly and fundamentally conquer their market.

What are they doing differently?

Here’s a video where we discuss this shift in more detail.